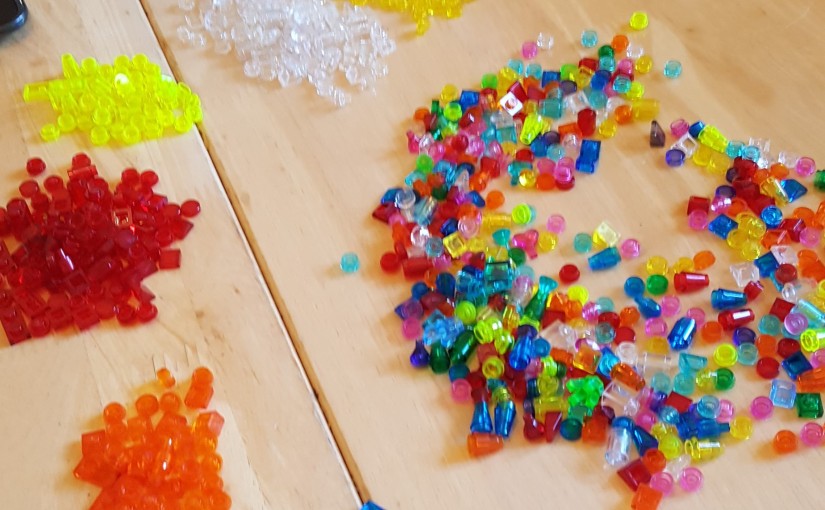 Last week, I was reading a brilliant book called Project Based Homeschooling by Lori Pickert. In it, she talks about making all learning and creative materials accessible to your child at all times. I thought that I had done this, but when I looked around, I realised that there were a few things that W had to ask me for as she couldn’t reach them. The books says that, although this is a tiny barrier to fully child-led learning, it is still a barrier nonetheless.

So W and I set about rearranging W’s learning area so that she can reach everything she wanted or needed straight away. W was great doing this. She loves categorising and really enjoyed tidying her pens and workbooks etc. She even helped to throw some things away that we didn’t need. The difference was remarkable. She was so excited that she could use whatever she wanted, whenever she wanted, that she ended up doing all sorts of things with paints, pens, glue etc. It has been fabulous to see her enthusiasm for creativity this week, after such a small change to a corner of our kitchen.

The rearranging of the learning area coincided well with a visit that we had later in the week, from the EHE (Elective Home Education) Officer from the Local Authority (more about why I accepted a visit here). The visit went very well; W showed the officer her encyclopedias on bats and dinosaurs and chatted confidently about what she does day-to-day.

I then showed our visitor W’s file of work (all worksheets and also colouring sheets are kept and placed in a folder in a vague chronological order) and certificates that I have been keeping for a year, since the date that W would have started Reception class. The officer was very happy with what she saw and went on her way, promising to return in a year’s time.

The aforementioned book says that it is important to show a child that you keep their work and that it is valued, however, I realised that I have been squirrelling W’s work away without telling her, so I will now make sure that I show her her folders more often. She was delighted to see the folder of work that I showed to the EHE officer, so I now see how valuable it was for W to see that all her work is important.

Maths: At the Post Office later in the week, W wanted to spend her pocket money on a toy, and did well at calculating what she could buy with what she had.

She also used a lot of maths when we played Monopoly Junior. She was excellent at adding and subtracting to work out what she needed to buy or sell to pay rent etc.

W later spent some time doing a bit of my work with me, categorising some items for my shop by type and colour so that they could be sold (more on categorising here and here). She enjoyed doing it and loved getting paid for her efforts!

She then started categorising her clothes in her bedroom. She wanted to sort everything by outfits instead of by type of clothes, so we are going to do more on that.

W got a board game about shopping from a charity shop and played it with her Nanna and Granddad, using toy coins to buy items.

Religious Education: W asked me one day why some women wear headscarves (hijabs) and some wear burkhas. She knows that the headscarf signifies someone being religious, but wanted to know more. I told her that the burkha was a different type of headscarf, but for the same religion – Islam. I said that religious people wear them and I told her about the women I knew who wear burkhas.

Geography: After school, W’s older sister, D (7) did a jigsaw of a map of the world and we all talked about the geography of Ireland, Asia and Australia, and also tigers!

W asked about the seasons of the year and what season follows which, so we chatted a bit about that. Later, she asked why clouds are different shapes and also where rain comes from.

On Thursday, W did lots of colouring on the train, which I always class as pen practise…

Play: W and D played with their animal figures and Shoppie dolls. As they often do, they took them all on a journey: got them all ready, got on a bus, got on a plane, got home and put them all to bed individually!

The next day, they played with the dolls house, setting up home for their toys.

Socialisation: F (2 years old) came round to play (with her two Mums). W was very good at sharing her toys: even giving away things that she’d just picked up so that F could play with them. She is showing a real understanding of how a 2 year old can’t yet be expected to be patient.

Science / Nature: W and I watched two episodes of her favourite vet show, which we both enjoyed and learned from. They sometimes show images from court and people being fined for animal neglect, which W asks about, so we have talked a lot about what fines are and how they are designed to help people to learn to do the right thing.

On the train, she asked about flying vehicles; what flies higher: planes or helicopters? What is the tallest vehicle on the land? How do planes and helicopters land?

W specifically requested that we make triple chocolate muffins this week, so after shopping for the relevant ingredients, W then helped with all the stages of baking (and eating).

Arts: When watching some of the X Factor on TV, we talked about what it means to be singing ‘in tune’. W is now starting to hear which people are singing in tune, and which aren’t.

PE: Went swimming to burn off the huge amount of energy that W has lately…

The next day, we went to a soft play place. She can go around the course with ease now, so was inventing new challenges for herself – like how fast she could do it or how many things she could climb in a certain amount of time.

I was so glad that our visit at the beginning of the week went well, although I admit to being nervous about it beforehand. It was all so positive, though, so once she had gone, I breathed a sigh of relief, happy to hear that we can carry on as we are for another year..