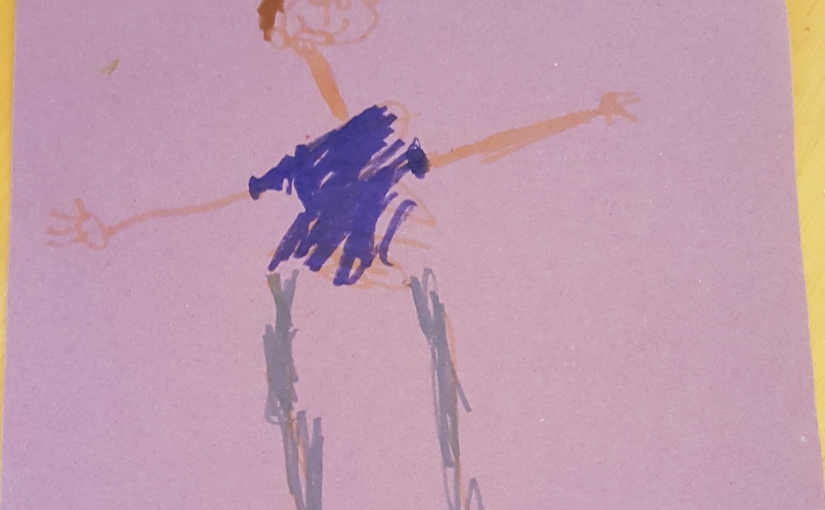 A lot of this week was taken up by watching TV and sleeping as W was ill with a bug for a few days.

I have noticed that W gets ill a lot less than her peers who go to school. I wonder, is this a good thing or a bad thing? Does being ill a lot and catching all the bugs in an institution such as a school make her immune system stronger, or is she better off not being ill all the time because that is simply a healthier way of being? Does she ‘need’ all these bugs to strengthen her immune system, or was it ‘good enough’ for her to be breastfed for 3 and a half years and to receive antibodies that way, instead of from illness? I suppose I’ll never know, but I do know that it is awful seeing her ill and life is much better when my children are well and happy.

So, this is W’s somewhat limited learning for the week, categorised by subject:

History / Politics: We watched a children’s documentary at W’s request, on King Charles I, parliament, the tower of London, the Houses of Parliament and the House of Lords. Then another on lots of subjects, such as the suffragettes, how Big Ben was made and transported to the top of the Elizabeth tower, how the clock is maintained, and where all acts of parliament are stored (on parchment).

Play: When W was feeling a little better, she had lots of imaginative play with her Shopkins, Magiclip Dolls, Playmobil Farm and with her Lego too. At one point when she was feeling very under the weather, she said she thought that her toys must be missing her and that she couldn’t wait to play with them, so it was lovely to see her giving them some attention again!

Literacy: W watched a fair bit of CBeebies and learned about Homer’s ‘the Odyssey’. She also watched Number Blocks, which she loves and even managed to shout the answers to problems at the TV.

Before the sickness bug struck, we played Monopoly Junior, during which W read some of the words on the ‘chance’ cards, added simple numbers together to pay rent on properties and generally did very well at the game.

We also visited the library this week and W chose some chapter books for bedtime stories.

On a journey through London, W helped to find the right platforms on the display boards, as she likes to do…. and then as we were on the train, W said she would like to find out more about how very tall buildings are made, so we sill look at that shortly.

Play /Social: When W was feeling up to it, there was a lot of imaginative play for W and D together, and also with a friend who came to play.

We went to visit the grandparents for a day and, as always, W had a great time playing silly games with them.

We also had some time at the park for some energetic play.

Science / Nature: At the park, we identified flowers and trees together.

W’s Grandfather was fixing a computer when we visited him, so he taught her about computer circuit boards. She was allowed to play with a computer fan and learned the difference between a large desktop computer motherboard, a small one and one that is designed for a laptop. She learned that the lines in the board were tiny wires and that the small PCBs had four layers in so that they could fit more wires into the space.

She learned why fans are needed for the computer processor and also learned a little bit about how computers are repaired and put together, and what tools are needed to do so.

I got a free printable resource which shows how a seed develops into a tree, so we looked at that together for a while.

When W wasn’t feeling well, she watched her favourite pet- and vet-themed programs on TV and learned about animal care and treatment.

Geography: W asked many questions about London, including its size and population. She then wanted to know which city in the world had the most people living in it. It turns out that it is Tokyo with almost 38m people. Delhi and Shanghai were next. She was fascinated by this and asked about where in the world these cities were. We looked at our giant atlas to find out and then learned some facts about Japan online. W liked the fact that Japan is similar to the UK in terms of size and population overall.

Numeracy: W has discovered dot-to-dot puzzles, which are great for enabling her to learn large numbers, and also great for pen control.

Art: W drew a picture of me and also a picture of herself at the beach. Both were great and were put up on display.

In fact, almost all drawings that W does are put up on display for a while – a tip that I got from the fabulous book by Lori McWilliam Pickert: Project-Based Home Schooling. I really recommend this book if you are new to home education, or if you want to know more about project-based learning. It has some brilliant ideas and strategies for us to be able to facilitate our children’s learning without getting in the way of it by being too prescriptive ourselves.