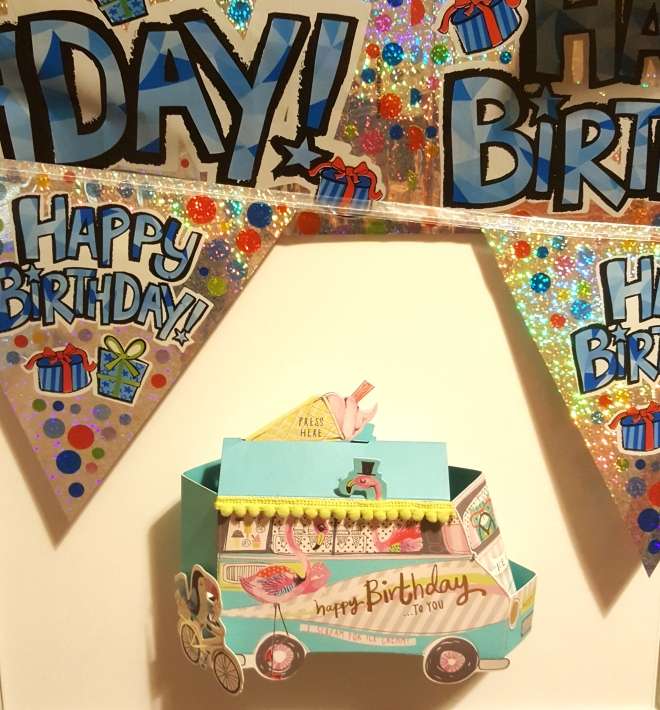 W had her 5th birthday this week, so we had a great time seeing the grandparents and playing with new toys. She was lucky enough to get this Stephanie’s House Lego set (age 6+) and built it almost by herself. She showed good concentration and is now very good at rotating objects in her head to see where the Lego pieces might fit. A few days later, she built her new LEGO Minecraft set and then played with it afterwards, role-playing showing her minifigures around the new sets.

Building her new Minecraft set had spurred W on to play real Minecraft on her tablet, where she built some more of a house that she has been creating. I have to say that I am amazed at how quickly children can pick up the game and learn how to create things on it. I don’t let her use the multiplayer mode yet, but she is happy enough creating her own ‘world’ in the game so far.

I’m pleased that W plays with Minecraft Lego as well as Friends Lego. I need to point out that we do not do ‘boy’s toys’ and ‘girls’ toys’ in our house. Toys and clothes are not gendered here. The children are free to wear pink or blue or any other colour that they choose. They can play with any toys that are age appropriate (and are not guns) regardless of which gender they are marketed to (more information on this can be found here). I read a fantastic book, backed up by a great deal of research on the subject by Cordelia Fine, called Delusions of Gender. In it, she debunks ‘neuro-sexism’ and explores how society will have us believe that there are huge differences in male and female brains; and seeks the scientific proof to the contrary.

Another new birthday present that W received this week was this Disney Princess Heart Box, which she spent some time decorating. She then really wanted to paint this Galt Toys Tea Set. W enjoyed choosing the colours and styles that she wanted on each item. She liked it so much that a few days later, she went on to paint a couple of china chicks for us to have as Easter ornaments. They turned out great and are now part of the Easter box of plastic eggs and trinkets that we get out every year.

W, D and J all did some ‘work’ for me on my business when they wanted to. This is both educational and a great way for them to learn about the value of money. I have written more about the subject in my blog posts about pocket money and chores.

The next day, J, D and W all played together at a soft play centre. On the way there, W wanted to spot which bus was ours. She looked out for the correct numbers on the bus and found the right one in no time. She then spent a long time talking to J on the journey, and teaching him all she has learned over the last few weeks, showing that she has taken in a lot of information.

Later, all the children watched two videos together, as they needed to wind down after such a busy day. Whenever we watch a video, we have the subtitles on. The older one likes to read them to catch anything he may have missed (or to pick out inaccuracies), the middle one likes to read the words of the songs so that she can learn them, and it is helping W to be motivated to learn to read as well.
Three friends came to the house later in the week for an Easter egg hunt. My partner had set up clues for the children to follow to find eggs around the house and garden. D and J’s clues were written, and W’s were in words and pictures. They all did well to work out the answers and find their eggs. After much chocolate was eaten, they all played noisily in the park and the house and properly enjoyed their day! We had another social engagement later in the week when another friend came to the house to play and much fun was had again.

In addition to the planned play dates we had, there was also an impromptu social opportunity for W, when one of the trains that we traveled on this week was delayed, meaning a 3 hour journey for us. W spent the time playing with 4 other children (ages 9, 7, 5 and 3), sharing her toys and role-playing moving house, going to prison (!) and playing doctors, amongst other things. The other children loved playing with her and they all got on very well for the whole time we were travelling.

Back at home, W wanted to work on some activities in one of her magazines, so she read a few words of an Alphablocks story, even reading a couple of words without sounding them out first. She also matched some sticker shapes, followed dotted lines with her pen and cut out some shapes.

Since we are lucky enough to have all the children at home because of the school holidays, we visited Deen City Farm. There was lots to do and the children learned about what goats, sheep and cows eat. One of the goats ate a piece of the paper packet that the food was in and we had a discussion about what would happen to the packet and why goats eat things that they shouldn’t. They also learned the difference between herbivores’ teeth and carnivores’ teeth, since they noticed what shape the goats’ teeth were. We had a chance to pet rabbits and guinea pigs, and to ask lots of questions of the staff there.

We saw owls and W asked why the owl was awake in the daytime. She learned about how owls are bred and tamed, and how they are cared for. We then watched a riding lesson and then pooped in to see the rabbits and guinea pigs being cleaned out.

After looking at all the animals, it was time to play in the playground. Even though it was the school holidays, we managed to find another home educated child there to play with. W chatted to him and played with him on the slides and climbing frames.
D and W played catch at the bus stop on the journey home and then D later read her book to both W and J while we waited. W just loves being read to and loves books in general, so having D read to her benefits them both so much. We had one of those perfect parenting moments at that bus stop. You know, one of those moments where all the children are behaving perfectly and doing something very sweet while people look on and smile. It was definitely one of those times where I felt all smug (before the children’s grumpiness kicked in a few minutes later, but I won’t mention that…..).